In early August, HUD released its biannual Worst Case Housing Needs report to Congress. The report indicates the number of very poor unsubsidized households struggling to pay their monthly rent and who may also be living in substandard housing increased between 2013 and 2015. 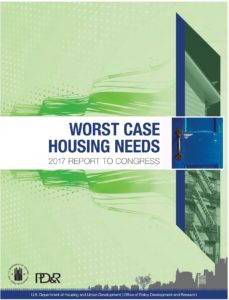 In this report, HUD states that in 2015, 8.3 million very low-income unassisted households meet the definition of worst case housing needs as they:

Further, HUD’s report finds that housing needs cut across all regions of the country and include all racial and ethnic groups, regardless of whether they live in cities, suburbs, or rural areas.

In addition, HUD concluded that large numbers of worst case needs were also found across various household types including households with children, the elderly, and persons with disabilities.

The following is a summary of the reports findings: